Police Officer Salman Khan as Chubul Pandey is back.

September 11, 2019 Comment
The YouTube channel of Salman Khan Films has given information about Chulbul Pandey's return. SKF Has released the teaser of the film. Dabangg 3 will be released on 20 December. The film has started preparations to earn a good amount on Christmas Week. Sonakshi Sinha and Salman Khan were also seen in both the earlier parts of this film. This onscreen husband-wife pair was very much liked by the audience. Salman Khan's film is directed by Prabhu Deva.

Audiences had been waiting for the third offering of the Dabangg series for a long time. Dabangg 2 had been released for 7 years. Dabangg 2 was released in 2012. After a wait of 7 years, now Chulbul Pandey's swag will be seen in Dabangg 3. The first part of Dabangg series came in 2010. Dabangg, Dabangg 2, Both films were super hits. Now Salman is on a hat-trick.

Akshay Kumar will be seen in the role of Prithviraj Chauhan.

Akshay Kumar will be seen in the role of Prithviraj Chauhan.

The king who became synonymous with bravery. Even today, the whole of India is convinced of the bravery of this king. About 1000 years ago, Delhi was ruled by the most powerful king of the Chauhan dynasty. Prithviraj Chauhan was that emperor of Delhi.

Many of Prithviraj's biopics have been made in the Indian film industry. Now another film will be added to this list. Akshay Kumar has launched the teaser of the film Prithviraj Chohan on his 52nd birthday. The film is being made under the banner of Yash Raj Films.

The film is directed by Dr. Chandraprakash Dwivedi. The film is produced by Aditya Chaupra. The teaser of the film is a motion poster showing Prithviraj and his army on the battlefield. This 1 minute teaser has been well received by people on social media.

Not much has been revealed about the film Prithviraj Chauhan. The film will be released on Diwali in the year 2020. For almost 2 years, there was little news about the film but it was not official, but now an official announcement has been made.

Australian veteran bowler Shane Warne says the great batsman of Test Cricket is Steve Smith. Shane Warne was asked which of the best batsmen among Steve Smith and Virat Kohli. Shane Warne said," this question is very difficult but if I have to choose one, I will choose Steve Smith for Test cricket."

Steve Smith has become the second fastest batsman to score 26 centuries. Smith scored a double century in the first innings of the third match of the Ashes series. Steve Smith played 121 innings for 26 centuries. In the first place is the great Australian batsman Don Bradman, who scored 26 centuries in 69 innings.

Former Union Minister P. Chidambaram will be in Tihar Jail till 19 September.

P. Chidambaram will be in Tihar Jail till 19 September.

The special court of CBI has ordered that P. Chidambaram will remain in Tihar Jail till 19 September. This court order has come in the INX Media case. The CBI arrested P. Chidambaram on August 21. The former Union Minister has been in custody for 15 days since his arrest. 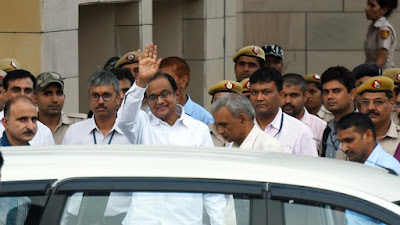 P. Chidambaram appealed to the court that he should be kept in the special cell and there should be a facility of western toilet. The court has accepted Chidambaram's appeal. The court also said that the jail administration should pay special attention to the security of the former Union Minister.

After the court order, Chidambaram's supporters protested against the Modi government and while talking to the media said that Chidambaram has been implicated in a false case, this is a political revenge for the Modi Government.

One state in the US is Tennessee. The capital of Tennessee is Nashville where St. Edward Catholic School is located. Nowadays this school has become the headlines of news papers. The thing is that this school has decided that students will not read the Harry Potter novel.

What is the matter?

The reason for preventing students in school from doing so is very interesting. The news is that the school's pastor, Reverend Dan Reheel, spoke to the occultists in Rome and America, in which they told the pastor that the Harry Potter novel should not be kept in the school's library.If this is not done, the students will start abusing the magical power written in the Harry Potter novel.


The school management says that the pastor has the right to take a decision in this matter but we cannot remove this novel from the school library. But we can make sure that the novel will be banned in school so that no student thinks of reading this novel.

Prabhas and Shraddha Kapoor's film Saaho received negative reviews from critics, resulting in some viewers considering the film a disaster film. It has been 5 days since the film was released and every day the film is earning well.
Critics feel that no one can understand the matter of the audience's mind better than them, so they consider themselves the main person of this film world.

Saaho is a great movie

The result of the hard work of the people working in this film production is that the film became the king of the box office. From the day of release to its 5th day, the film has done well at the box office.
The film has been released in four languages. These languages ​​are Hindi, Tamil, Telugu and Malayalam.
This film is doing wonders in every language. The craze of this film is increasing in the audience.

Pakistan has been outraged by the Indian government's decision on Article 370. Pakistan appealed to the United Nations on this issue, but Pakistan was to no avail. Imran Khan is not worried about the people of his country. Pakistan is suffering due to financial constraints. But what does this mean to Imran Khan who threatens war?


India has already clarified its stand on Jammu and Kashmir. And have told the whole world that this is our internal matter, we will solve it. Pakistan is isolated in the world.
But Pakistan's policy on Jammu and Kashmir never changed. Imran Khan and his ministers spoke of fighting for Kashmir till the last drop of blood.
Imran Khan said that an air strike like Balakot could happen again.

Many governments of Pakistan were formed on Kashmir issue, but no government was harmed like Imran Khan government.
Imran Khan was confident that China and other countries would also support Pakistan on the issue of Kashmir.
China supported Pakistan, but other countries said that this issue is an internal matter between India and Pakistan, so they cannot interfere in it.

For Pakistan, it was a defeat. Now the problem for Imran Khan was how to give this bad news to the people of Pakistan, so Imran Khan did another trick. Imran Khan is very sad to lose Kashmir. That is why Imran Khan is now talking about a nuclear attack.

Defence Minister of India, Rajnath Singh said  that Kashmir never belonged to Pakistan, so Pakistan should not think about it. And this statement is very painful to Pakistan.

No food, no money, but ready for Nuclear Attack

Pakistan is in financial crisis. But Imran Khan is neither worried about the people of Pakistan nor their future. There is starvation in Pakistan. But Imran and his ministers fall in love with the war.In such a situation, first feed your people with food and then talk about war. Even after losing four wars against India, Pakistan has not understood how powerful India is.

This is Imran Khan's new Pakistan. Do not be surprised that such things keep happening in New Pakistan. There is news that the electricity bill of Pakistan PMO is in crores of rupees. The power supply company has asked to deposit the arrears in due time. In fact, for several months, the PMO did not pay the bill of Islamabad Electric Supply Company after which the company issued a notice to pay the outstanding amount. Also threatened that if this bill is not filled then the connection will be cut.