Home Only Cricket Rohit and Virat became the heroes of India's series win over Australia.

Rohit and Virat became the heroes of India's series win over Australia. 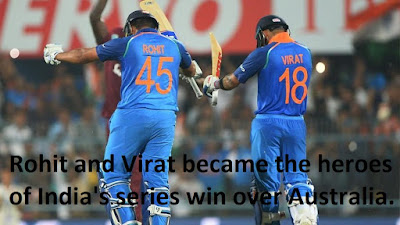 After losing the first match, the Indian team made a great comeback in the second match. And equalised 1–1 in a series of three matches. The last and third match of the series had become special for both teams.

Australia won the toss once again and decided to bat. But soon David Warner was out on the team's 18 runs score.

Chasing the target, the Indian team lost the first wicket in this match at a score of 69. KL Rahul was dismissed by 19 runs. After this, Virat Kohli and Rohit Sharma batted brilliantly and brought India to the threshold of victory.
Rohit Sharma and Virat Kohli shared 137 runs to take the team score to 206. Rohit Sharma scored 119 runs. This was Rohit Sharma's 29th century. Virat Kohli scored 89 runs.

After this Shreyas Iyer scored 44 not out and Manish Pandey scored 8 not out. India defeated Australia by 7 wickets by making 289 at the loss of 3 wickets.

The batting of Rohit and Virat contributed significantly to India winning the series 2–1 over Australia. Both these batsmen were the heroes of India's victory. Rohit Sharma became Player of the Match. Virat Kohli became the Player of the Series.