Home Film and TV Actor and writer Golpudi Maruti Rao is no more.

Actor and writer Golpudi Maruti Rao is no more.

Chennai: Telugu actor, writer and theatre icon Golapudi Maruti Rao is in Chennai on Thursday. He was 80 years old.  At 11:10 in the morning, he breathed his last at Lifeline Hospital in Chennai.

Golapudi Maruti Rao had appeared in more than 250 films. Apart from this, he also wrote for many films and plays. In 1997, he also founded the Golapudi Srinivasa Memorial Foundation.


Actor Mahesh Babu on his twiter handle
Deeply saddened by the sudden demise of #GollapudiMaruthiRao garu. His contribution to the TFI remains unparalleled. We have lost a gem. Heartfelt condolences to the family and dear ones. Rest in peace Sir.


Twitter handle of the Telangana CMO posted
CM Sri KCR has expressed shock over the demise of noted writer, actor and columnist Sri Gollapudi Maruthi Rao. Recalled and hailed the services rendered by Sri Maruthi Rao to the Telugu cinema and Telugu literature. Conveyed condolences to the bereaved family member. 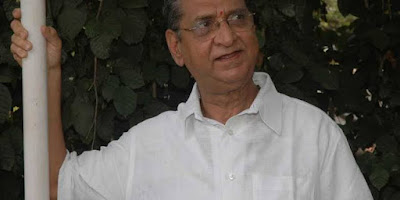 A statement from his team informed that his body would remain there hospital till Saturday until his family members arrive from abroad. From Saturday afternoon to Sunday afternoon, his body will be kept at his home for fans to pay tributes. His second son Ramakrishna will perform the last rites on Sunday afternoon in Chennai.