Home Top Issues Rafale of France is now in the service of the Indian Air Force.

Rafale of France is now in the service of the Indian Air Force.

Published October 08, 2019
Tags
Top Issues
Defence Minister Rajnath Singh was formally handed over the Rafale aircraft by France. Tuesday, October 8 became a memorable day for Indians. Today is the festival of Dussehra in India and also the 87th Air Force Day of the Indian Air Force and on this day Rafale also joined the Indian Air Force.

The Defence Minister performed 'Shastra Pooja' on the Rafale fighter aircraft before flying in the Rafale fighter plane. On the plane, Defense Minister Rajnath Singh wrote the word 'OM' from  sindoor and offered flowers, coconut and laddus on the plane. Apart from this, two lemons were also placed under the wheel of Rafale aircraft. 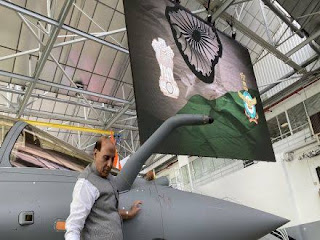 Defense Minister Rajnath Singh said in Merignac, France, "I am happy that delivery of Rafale is on time." I am convinced that it will strengthen the strength of our Air Force. I am willing to cooperate further in all areas between the two major democracies. ''

Eric Trappier, CEO of Dassault Aviation, the company that produces the Rafale fighter plane, said on the occasion that it was a big day for the Indian Air Force and India as well as France and Dassault Aviation. The contract we had signed and is now ready to take off. We are very proud.

The deal for Rafale fighter aircraft was signed in September 2016 for 5900 crores. India received its first Rafale fighter plane out of 36 aircraft purchased from France on Tuesday. The first batch of four Rafale jets will fly to home base in India by May 2020.